How safe is vitamin D?


“All things are toxic, and nothing is without toxicity; the dose alone determines if something is toxic.”
Paracelsus


I am often asked, “How safe is vitamin D? If my toddler gets into my vitamin D, will it hurt him?”

Generally, no. The exception may be a bottle of 50,000 IU capsules of D3. If your toddler ingests 20 capsules before you find him, he will probably develop hypercalcemia and may die.

Of course, there are risks with a child getting into anything they are not supposed to. Ingesting 20 capsules from a bottle of 50,000 IU D3 will likely result in an emergency situation of hypercalcemia, in which it is important to get medical attention as soon as possible.

When occasions as tragic as this occur, vitamin D opponents (and there are opponents) will pounce, “I told you, it’s a dangerous drug.” However, many often ignore the potential dangers of Tylenol, which is marketed in a bright red and yellow bottle, easily mistaken as a harmless candy by young toddlers.

Of course, should any child die from an accidental overdose of prescription or over the counter drugs, the situation is tragic and precautionary measures should be taken to prevent further injury or death. However, when situations such as these occur, lawsuits occur and many ignore the fact that these products have been on the market for decades without any problems. The issue does not lie with the product, but with the dose, as my friend Paracelsus might agree.

Another common question I have received over the years is, “If I mistakenly take two capsules instead of one, will it hurt me?” Theoretically, if you took two of the 50,000 IU capsules per day for at least two months, you may reach toxicity. It all depends on your genetics and your weight.

Will it hurt to take 50,000 IU/day for several weeks? As I have written, in all ways that can be assessed, vitamin D is safe. For example, let’s compare vitamin D to water. Assume you need eight glasses of water/day for good health. Ten times that amount will rapidly kill you via fluid intoxication. Now, let’s assume adults need 10,000 IU/day. Ten times that amount (100,000 IU/day) may also be fatal. However, both are essential for life, and both can be detrimental if taken in excess.

How many people die every year from vitamin D overdose? As I wrote, of the 15,000 Americans who overdosed on vitamin D from 2001 to 2014, none died. Only five of the 15,000 developed signs or symptoms of toxicity, and 2 were infants who had D drops put into their nose instead of their mouth. During that same 14 years, more than two-thousand people died from Tylenol overdose, including a number of toddlers.

Tylenol (in its bright red and yellow package) overdose is actually the leading cause for calls to Poison Control Centers across the US, about 100,000 instances per year, and is responsible for 56,000 yearly emergency room visits, 2,600 yearly hospitalizations and a staggering 458 deaths/year due to acute liver failure, many of them toddlers. That’s more than 5,000 Tylenol deaths over the same 14 years that vitamin D caused 0 deaths.

By any measurement vitamin D, in physiological doses, is safe. But, that depends on dose. Don’t just say, “I’m on vitamin D.” Instead, tell people how much you are taking. Remember, the dose makes the medicine.


How common is vitamin D toxicity?

From 2000 through 2014, there were 25,397 calls to poison control about overdoses of vitamin D (Figure). There were about 200 calls/year in the year 2000, which has increased to more than 4,000 calls per year recently. During that 15-year period there were only three serious cases of vitamin D toxicity, but no deaths. 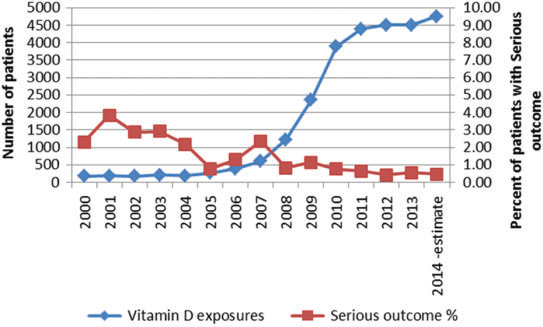 Figure: Number of patients who consumed vitamin D and percent with serious outcome by year.


Do you know how many people died from Tylenol toxicity during that same time? About three thousand.

As far as suicide attempts, 106 people tried using overdoses of vitamin D to kill themselves, though none succeeded.

All of this was well understood by at least one person back in 1999. Professor Reinhold Vieth, in his classic paper, wrote about the safety of human vitamin D preparations. If you are only going to read one paper about vitamin D, read his. It was this paper that converted me to the importance of vitamin D and sparked the initiation of the vitamin D revolution.

Is your doctor telling you that you are taking too much vitamin D?

The chart below, based on a review published by Hathcock et al.[1], shows the incidence of vitamin D toxicity in relation to daily vitamin D intake (up to ten million IU per day). The blue circles represent pharmacological studies using doses of up to 50,000 IU vitamin D per day. The red triangles represent cases in which vitamin D intoxication occurred, the intake was known, and the 25(OH)D level was measured. No toxicity was observed at levels below a 25(OH)D serum level of 200 ng/ml (500 nmol/L), and no toxicity was observed in studies reporting a daily vitamin D intake below 30,000 IU. Due to the wide range of responses to supplementation some individuals will require a daily dose greater than 4,000 or even 10,000 IU/day to reach the recommended range of 40-60 ng/ml. As long as their 25(OH)D serum level is monitored and remains within a healthy range, they should be able to safely continue to take the dose necessary to maintain that level. Individuals with certain conditions, such as primary hyperparathyroidism, sarcoidosis, tuberculosis, and lymphoma, may be hypersensitive to vitamin D supplementation.

For more information, refer to Risk assessment for vitamin D, published by Hathcock et al. in the American Journal of Clinical Nutrition in 2007.

i nearly killed myself on 4000 iu per day long term (plus 2 short megadoses per the local hospital' standard 10 day regimen for increasing serum level by 50 nmol/l), and taking some cofactors all the while but not enough and not correctly timed. so glad i crossed the path of the right lifesaving pharmacist who put me straight. took years to rebuild tissue stores of depleted magnesium - what fun those early years were, eg trying to follow best bet intake recommendations using magnesium oxide...(bad idea)
active members shape site content. if there is a problem, speak up!
use the report button to flag problematic post content to volunteer moderators' attention.
Top

Yesterday my brother went to the Coimbra Protocol doctor.

All tests results are Ok!

I took advantage of the occasion to ask the doctor about Magnesium deficiency and Hypercalcemia.

The doctor has +500 patients - he works part-time in the hospital and part-time in his clinic. He said that half of these patients are people with MS and another half are people with other autoimmune diseases as Crohn's disease, Ulcerative Colitis, Atopic Dermatitis, etc. that also take high doses of vitamin D.

According to the doctor, less than 4% of his patients had health problems related to the protocol. He had only 18 patients that had hypercalcemia. Where 10 of them had it because of kidney problems that happened years before they started the protocol and rest of patients (8 people) had it because of lack of discipline to restrict calcium in their diets. They were eating a lot of calcium for a long period of time.

And only 3 patients presented clear magnesium deficiency. So, he dropped vitamin D dose and increased, even more, the Mag dose... some months later the side effects disappeared. After that, he increased simultaneously both vitamin D + Mag doses without any health issue.


At the clinic, I met a patient with Devic's disease that takes 500,000 IU D3/day. The highest dose that I ever seen. He is following it by 7 months and he is doing fine. Any side effect till now.


To cover another point of view I also talked with another doctor of Coimbra Protocol from another state. She helped me a lot when my brother was diagnosed in 2015.

She has +700 patients and she said that till now 23 patients had hypercalcemia (7 bcs of diet and 16 bcs of previous kidney problems). And only 5 patients had clear symptoms of Magnesium deficiency. She followed the same process - increased the Mag dose and decreased Vit D, then some months later all the symptoms disappeared. After that, she increased again both Vit D + Magnesium simultaneously.

Most of the people with previous kidney deficiency that both doctors quoted had ''Lupus nephritis'' for some time. Lupus nephritis causes inflammation of the small blood vessels that filter wastes in our kidney and sometimes the kidneys, by attacking them like they would attack a disease

One doctor also said that Dr. Coimbra guides +4,800 patients in his clinic and a lot of more patients worldwide through other doctors. Magnesium deficiency is very rare in his patients. Of course, it can happen but is rare.

They are treating more than +35 autoimmune diseases now.

Furthermore, my brother is doing hypnotherapy at the OMNI School of Hypnosis (Gerald Kein style) and he is really enjoying it. According to him it effectively lowered his stress. They have a lot of experience with MS patients (https://omnihypnosis.com/)

My brother also did Cognitive Behaviour Therapy (CBT) but he preferred hypnosis. Although CBT can also be combined with Hypnosis with even faster results [1].

The hypnotist recorded the Dave Elman Induction for Self-Hypnosis to use day by day at home. I already listened to dozens of self-hypnosis, guided meditations, and NLP inductions, but it was the most relaxing induction ever. I also used it and never relaxed so well with self-hypnosis.