Abstract
Dopamine has emerged as a fundamental regulator of inflammation. In this regard, it has been shown that dopaminergic signalling pathways are key players promoting homeostasis between the central nervous system and the immune system. Dysregulation in the dopaminergic system affects both innate and adaptive immunity, contributing to the development of numerous autoimmune and inflammatory pathologies. This makes dopamine receptors interesting therapeutic targets for either the development of new treatments or repurposing of already available pharmacological drugs. Dopamine receptors are broadly expressed on different immune cells with multifunctional effects depending on the dopamine concentration available and the pattern of expression of five dopamine receptors displaying different affinities for dopamine. Thus, impaired dopaminergic signalling through different dopamine receptors may result in altered behaviour of immunity, contributing to the development and progression of autoimmune pathologies. In this review we discuss the current evidence involving the dopaminergic system in inflammatory bowel disease, multiple sclerosis and Parkinson's disease. In addition, we summarise and analyse the therapeutic approaches designed to attenuate disease development and progression by targeting the dopaminergic system. Graphical Abstract Targetting the dopaminergic system in autoimmunity. Effector T-cells (Teff) orchestrate inflammation involved in autoimmunity, whilst regulatory T-cells (Tregs) suppress Teff activity promoting tolerance to self-constituents. Dopamine has emerged as a key regulator of Teff and Tregs function, thereby dopamine receptors have becoming important therapeutic targets in autoimmune disorders, especially in those affecting the brain and the gut, where dopamine levels strongly change with inflammation. 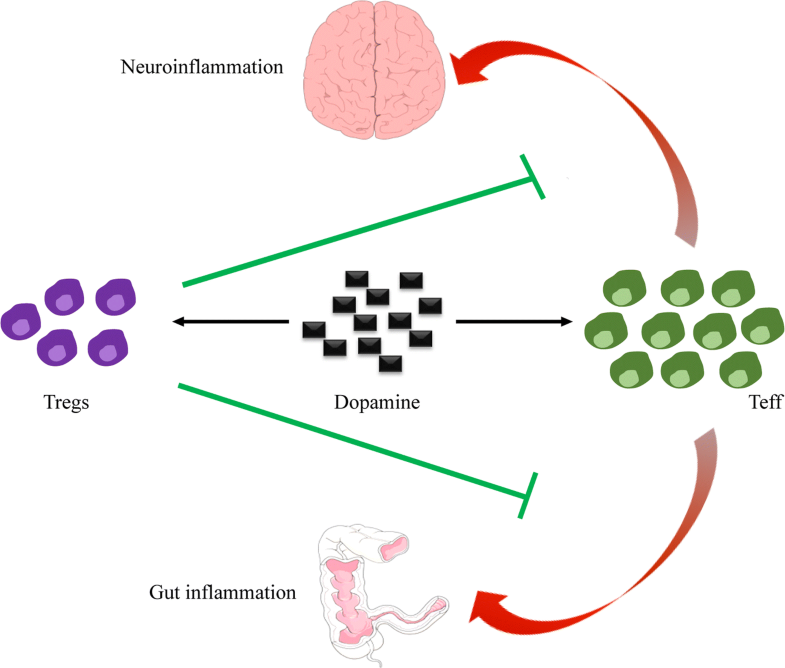 by Petr75
2019 May 11
Department of Pharmacology and Physiology, Drexel University College of Medicine, Philadelphia
Where Is Dopamine and how do Immune Cells See it?: Dopamine-Mediated Immune Cell Function in Health and Disease.
https://www.ncbi.nlm.nih.gov/pubmed/31077015

Abstract
Dopamine is well recognized as a neurotransmitter in the brain, and regulates critical functions in a variety of peripheral systems. Growing research has also shown that dopamine acts as an important regulator of immune function. Many immune cells express dopamine receptors and other dopamine related proteins, enabling them to actively respond to dopamine and suggesting that dopaminergic immunoregulation is an important part of proper immune function. A detailed understanding of the physiological concentrations of dopamine in specific regions of the human body, particularly in peripheral systems, is critical to the development of hypotheses and experiments examining the effects of physiologically relevant dopamine concentrations on immune cells. Unfortunately, the dopamine concentrations to which these immune cells would be exposed in different anatomical regions are not clear. To address this issue, this comprehensive review details the current information regarding concentrations of dopamine found in both the central nervous system and in many regions of the periphery. In addition, we discuss the immune cells present in each region, and how these could interact with dopamine in each compartment described. Finally, the review briefly addresses how changes in these dopamine concentrations could influence immune cell dysfunction in several disease states including Parkinson's disease, multiple sclerosis, rheumatoid arthritis, inflammatory bowel disease, as well as the collection of pathologies, cognitive and motor symptoms associated with HIV infection in the central nervous system, known as NeuroHIV. These data will improve our understanding of the interactions between the dopaminergic and immune systems during both homeostatic function and in disease, clarify the effects of existing dopaminergic drugs and promote the creation of new therapeutic strategies based on manipulating immune function through dopaminergic signaling. Graphical Abstract.
All times are UTC-08:00
Page 1 of 1
Powered by phpBB® Forum Software © phpBB Limited
https://www.phpbb.com/