People recovering from a stroke will soon have access to a device that can help restore a disabled hand.

The Food And Drug Administration has authorized a device called IpsiHand, which uses signals from the uninjured side of a patient's brain to help rewire circuits controlling the hand, wrist and arm.

The device can be used at home and offers stroke patients "an additional treatment option to help them move their hands and arms again," said Dr. Christopher Loftus of the FDA's Center for Devices and Radiological Health in a statement.

IpsiHand's authorization comes after the FDA reviewed results on patients like Mark Forrest, who had a stroke in 2015.

"We called 911 and off to the hospital I went," Forrest, who lives near St. Louis with his wife, Patti. "By the time I got there most of my right side was paralyzed."

After six months of rehabilitation, Forrest was walking again, but still had little control over his right hand. He struggled to pull on socks and button shirts.

Mark Forrest is back fishing after rehabilitation with the IpsiHand device helped him regain use of his right hand.
Mark Forrest

What he missed the most, though, was fishing for bass in the rivers and lakes near St. Louis.

Forrest tried cutting down a fishing pole so he could hold it with his left hand. But his right hand wouldn't reel in the line.

So he kept working with a physical therapist, month after month, until he got really frustrated.

Then Forrest began talking to people at a company called NeuroLutions. It was founded by Dr. Eric Leuthardt, a brain surgeon at Washington University School of Medicine in St. Louis.

For many years, Leuthardt had been puzzled by something he often heard from patients who'd lost the use of hand after a stroke.

"If you talk to a stroke patient, they can imagine moving their hand," he says. "They can try to move their hand. But they just can't actually move it."

So Leuthardt had been looking for the source of those thoughts. And he found them in a surprising place: the side of the brain that had not been injured by the stroke.

Leuthardt's team built a system that could detect and decode those ipsilateral signals. Then they connected it to a device that would open and close a patient's disabled hand for them when they imagined the action.

But a mechanical hand wasn't Leuthardt's ultimate goal. He wanted to help his patients regain the ability to move their hand without assistance. And that meant answering a question:
Early experiments suggested the approach worked. A video of one man with a disabled hand showed him initially trying and failing to grasp a marble and place it on a shelf.

"Then after six weeks of training, he can pick up that marble and he can move it on top of the shelf," Leuthardt says.

NeuroLutions tested the device on 40 patients for 12 weeks. All of them got better, and the results persuaded the FDA to authorize marketing of the device. 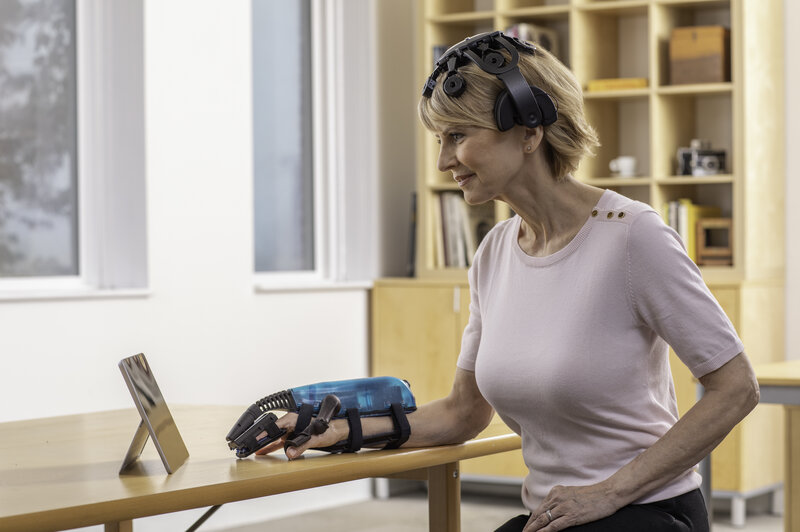