Notes from CureIous' at Stanford

I'm in love with a man who was diagnosed with PPMS in 2007. He was 57-years-old, and I was 54. Our future was snatched away from us. Now we have hope. Thank you from the bottom of my heart for being one of the pioneers in this research.
Top

Mark that is awesome! well done thank you so much for taking the time to do this video. It makes the whole thing far less mysterious. I love how you showed the collaterals and it gave the watcher enough time to digest what they were seeing. Other things I have seen move along so fast the watcher can't really get the sequence down in their minds, yours works perfectly.
marie
I'm not offering medical advice, I am just a patient too! Talk to your doctor about what is best for you...
http://www.thisisms.com/ftopic-7318-0.html This is my regimen thread
http://www.ccsvibook.com Read my book published by McFarland Health topics
Top

Thanks all, and thanks to Joan for putting it up on her FB page. Only for posterity, did have to fix that spot in the middle at 2:30 which as far as I can see, nobody noticed but it bugged me so it's fixed now.

It's not substantially different just got the wrong pic in there.

(previous comments deleted by myself at my own behest).

Thank you to everyone for your kind comments, means a lot. The vid was meant mostly for the newbies to get some rough idea of what is involved with all the new jargon they are trying to understand. From some of the feedback received, mission accomplished. Wasn't trying to explain CCSVI start to finish and all points in between, just capturing a brief perspective in a limited fashion. Point in the right direction as they say.

Loved the video and music. I never ceased to be amazed at all the bright and creative people on here.
Top

coach wrote:Loved the video and music. I never ceased to be amazed at all the bright and creative people on here.

Thanks Coach! I'll let Nika know, she's gone through quite a trial as of late and appreciates all the nice comments...

Red Cross called me last week to donate blood, which I hadn't done in awhile and thought, "duh", that's something any of us can do right now that would help others, I do that apheresis thing where they pull out a bunch of RBC's and dump your plasma back in. I literally broke the machine in, whoo hoo!

Can think of NO better place to discuss blood flow than a RC donation center, AND, it was a brand new center, AND I was the very first person to donate there!! Wasn't aiming for that, just how it panned out. No big whoop, but, Mr. Big Mouth doesn't waste any opportunity when there's medical professionals, students standing around watching the machine whirr away. Why not? Beats doing a crossword puzzle. Many an interested ear was lent, which is good. Imagine if all of us did that to just a few people a week, believe it or not there are thousands and thousands of MS'ers out there that haven't heard word one of this.

It's not about selling stents, selling CCSVI or a particular institution or individual, it's about opportunity, opportunity to at least know that it exists and whether to pursue further or do nothing, but there's a choice there that doesn't exist if you don't even know you may have options.

And yes, I shamelessly wore my "Dr. Dake fixed Daddy" shirt as a conversation starter, though with Mr. Big Mouth here that's not necessarily needed...

I'm hoping the very cool people I was talking to at the canteen afterwards find their way here, one was a medical student and asked "who's Dr. Dake" after seeing my shirt, I was like, "what? WHO is Dr. Dake?, are you kidding me? THE Dr. Dake?". Okay not quite that dramatic, but we had an interesting conversation, and yes it was a two way deal, and this other young gentleman had since then come and sat down at the table and I could tell he was listening very intently to us, as I got up to leave he inquired about all this he was hearing, turns out his Mom has MS, recently dx'd, in her 40's, on Avonex, you know the drill.

I just really thought that was touching, here's a kid who loves his Mom to death , stumbling across a stranger talking weird stuff about veins etc etc. I wrote him out some quickie links and let google handle the rest.

Way I look at it, conversation is cheap, easy, and the worst that happens is people think your nuts and don't care or don't know anyone with MS or even what MS is, that's part of the territory. But I guarantee you that within 2, maybe 3 connections of that person is someone they know with MS.

The best part about it is, there's really nothing to sell, it's just a matter of relaying that there may be something worth looking into, that's all. Can't hurt right?

I've seen "hype" mentioned on here. That's what people do when they are selling something. Only thing I'm selling is a big arrow pointing in a certain direction, maybe some directions on how to get there a bit quicker. If that's considered hype, so be it. If truthfully and energetically cataloging my positive results is hype, so be it. If my results go South, you'll be the first to know, but the past 365 (almost) days of solid results is certainly not a figment of my imagination or an embellishment.

Does that mean that results, or outcomes to the downside haven't happened in CCSVI? They definitely have, and they should be discussed at length. There are real risks here happening to real people in real time which should be duly reported as such so people can make informed decisions, think we're all agreed on that one. I feel one of the unintended effects of my video offering is to show that yes, there really are these THINGS that will live in your neck for the rest of your life. It's so easy to say "oh I'm getting stents", it's another thing to see them and realize they are there forever.

Anyways thanks for letting me ramble on, sorry no more big whizz bang multimedia presentations pics and such, that's the last of it for now. Glad it's done, sorry it's only going to reach a small fraction of the intended audience. Can't win em all as they say....

Once again, Mark, is the conduit to allow knowledge to enlighten those who are ready to hear.

Nika was a perfect choice for the heartfelt music for a labor of love video. Great job!

Katie41 wrote:Once again, Mark, is the conduit to allow knowledge to enlighten those who are ready to hear.

Nika was a perfect choice for the heartfelt music for a labor of love video. Great job!

don't really know what I at least thought I was responding too, but I'm editing out this message because I can't find the OP. OOPS.
Top

Happy birthday to my stents and a new beginning. 8/04/2009, one year ago today to the hour I was getting worked on.

One year later, well I did something super stupid today to celebrate, or in other circles what is rated as "good times". When I graduated my 5 year apprenticeship in 2000, the agreement was between us students (during the first semester) that if we completed all 5 years, we would go skydiving together.

Alas, 5 years went by and I ended up going alone lol. (Wasn't my idea!). Deals a deal as they say.

So I've had an itch to go again, just one more time is all, but thinking long and hard about it through the intervening years, decided there was no way I could keep my wits about me enough to maintain situational awareness. Best to keep the feet on the ground and watch IOW. The very thought of having cog fog and confusion at 13,000 feet is enough to say no.

Today, it was different, I was amazed at how clear-as-a-bell the mind was at elevation, even in thin air. The best part was, my videographer has a father with MS for 18 years and people on the plane (the regulars) were very supportive and excited too.

Good times, kids were there too, it was a family affair... Will have a 1 year "celebration" video out next week including the jump. To me, the analogies between free falling and free flowing, and the freedoms attached to both, say it all... 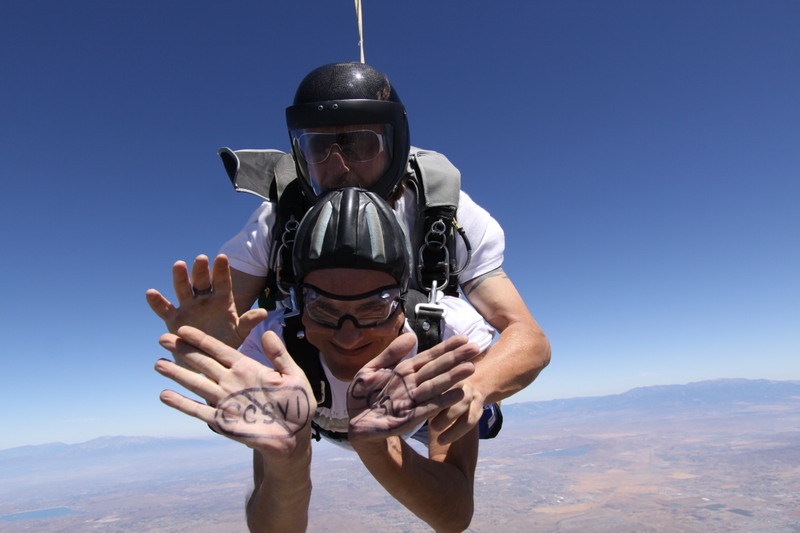 Just heard from CureIous' good friend Don who tells me that he left Op Prep at 4:30pm the op will be roughly 2hrs and recovery about 3hrs. He will be getting double jugs way up high and another set by the shoulder.
Last edited by CureIous on Wed Aug 04, 2010 4:12 pm, edited 1 time in total.
RRMS Dx'd 2007, first episode 2004. Bilateral stent placement, 3 on left, 1 stent on right, at Stanford August 2009. Watch my operation video: http://www.youtube.com/watch?v=cwc6QlLVtko, Virtually symptom free since, no relap
Top

Dang! That is an insanely awesome pic! Well done!
Top

Rokkit wrote:Dang! That is an insanely awesome pic! Well done!

I had an insanely awesome videographer with me, it's not easy encapsulating CCSVI/MS/ 1 year anniversary into a quickie explanation before he starts shooting on the ground lol. Absolutely GORGEOUS weather for jumping. Sharpie on the hands is about all you can do, not like can carry a sign on the way down so it's a bit cheesy haha.

Thnx Rokkit. Hope others can get maybe some inspiration and keep on keeping on wherever they are.

That says it ALL!!! FREEDOM!!! Absolutely perfect celebration

So apropos'-gosh, is that the word? I've never actually seen it spelled out before

I am really ha[ppy for you Mark! What an incredible picture! A one year anniversary is a wonderful incredible milestone. I am impressed with your way of celebrating, nice!

I'm not offering medical advice, I am just a patient too! Talk to your doctor about what is best for you...
http://www.thisisms.com/ftopic-7318-0.html This is my regimen thread
http://www.ccsvibook.com Read my book published by McFarland Health topics
Top

What a great picture! Congratulations on your 1 year anniversary.
"However, the truth in science ultimately emerges, although sometimes it takes a very long time," Arthur Silverstein, Autoimmunity: A History of the Early Struggle for Recognition
Top
Post Reply
354 posts