This is part of a recent email from Dr. Coimbra in which he talks about his experience with autism and high doses of vitamin D:

"...Laboratory markers of autoimmunity have been found in autism spectrum disorder (ASD) and vitamin D deficiency during pregnancy is strongly related to autism in early childhood.

We have used high-dose vitamin D in a few children and in a 17-year old boy (from Rio de Janeiro city) during the last 2-3 years, and all of them have reached normal or near normal behavior as a result of that therapy. In the first appointment he was silent and would not look at me; his father was passing all information on his clinical history since early childhood. For some time (a year or so, from 6 months of therapy) the 17-year old boy (now 19 to 20 years old) could report on the reasons of his behavior. Deep fear (triggered by the sensation of excessive proximity to the unknown) was reported as the reason why he previously would not look at the others' eyes, would not talk to others, and would not interact in anyway with others.

Amazingly, after 2 years of treatment he could remember nothing about what he had originally reported, and had lots of plans for his own future (he said he wanted to spend sometime in Canada for learning English as part of a student exchange program; "why Canada?" - I asked - and he said he had been investigating and identified Canada as the country where foreigners are more easily accepted; he said he wanted to move to a regular school in Rio de Janeiro in 2018 because he misses interacting with normal adolescents and young people in general; he wants to get a job to become financially independent from his parents; he even said he had been searching the internet by himself and concluded that the spreading of the knowledge on the importance of vitamin D for public health faces the opposition of drug companies). I do not have videos about these cases (only pictures that I take and insert in the electronic patients' charts / records).

Younger individuals (children) would not be able to report on anything after recovering from ASD, and when they reach normal behavior their parents usually move them to another school (where they are treated as normal children) to avoid prejudice that they would have to face if they would remain in the original school.

Nevertheless, we feel committed to spreading the good news. It is relatively less uncomfortable to think that we now have a growing worldwide network of physicians trained in our clinic who (hopefully) could (at least in part) absorb the huge work I am anticipating for the next few months related to ASD."
Top


"Hi everybody, I'm here to share my testimony about the extraordinary improvement of my son.

I have a 3 year old boy, he started to show some changes in his behavior and this led me to seek psychological help for him because after several internet searches and conversations with some mothers who have children who fall into the ASD (Autism Spectrum Disorder), I began to believe that he would also have some degree of autism.

Well, I got a consultation at APAE (Brazilian governmental institution for diagnosis and treatment of children with developmental problems).

There the child undergoes an evaluation with several specialists to see if a diagnosis process is really needed. Then a meeting was held with my husband and me where we stayed about 1 hour, only answering some questionnaires.

In the room there was a psychologist, and speech and occupational therapists. They took notes of everything we said. Later they called us and let us know that our child needed further observation, not only in one area but with all the behavioral specialists.

For now he's being seen by three therapists but he still has no final diagnosis. The psychologist said that because he's very young she would wait a little longer until he started the school alphabetization phase. She also said that she will not "label" him at the moment and added that it's not because he has the characteristics of ASD that he is autistic..

The APAE Neurologist also evaluated him and prescribed RISPERIDONE
The medication made him very sleepy and instead of helping, he was getting worse! I got so worried when I saw reports from mothers claiming that after continued use of this medication children had serious problems with the pancreas!

On my own, I stopped the medication ... and sought help from a reputable pharmacist in my city, she knows Dr. Cicero Coimbra and the Coimbra Protocol and makes supplements for several mothers of autistic children.

I asked her to do something natural, to replace RISPERIDONE.
For 30 days my son has been using the supplement he manipulated...

HE IS VISIBLY BETTER!!!

Less aggressive, more focused, angry bouts are much milder.
All this only with the use of supplementation which contains 2,500 IU of vitamin D3!!! (This is the physiological dose that Dr. Coimbra recommends to all children - 1,000 IU for each 5kg until a maximum of 10,000 IU for 50 kg or over).


AUTISM AND THE COIMBRA PROTOCOL:

Autism case via video
In November 2017, I was in training for Dr. Coimbra, I've covered this in several articles on this blog.

One day after lunch, Dr. Coimbra showed us a video of a father with his son. The boy was fiercely arguing with his father, confidently and quickly speaking.

Dr. Coimbra says: This video was taken two years after therapy began. When the boy came to him for the first time at the age of 15, he was the typical autistic child, withdrawn, barely in contact with the environment, unable to speak, unable to perform the simplest activities.

Dr. Coimbra had learned that there are autoimmune components to autism, according to recent studies, and he decided to treat the patient with his protocol.

Three months after beginning therapy the boy started to speak. In one of the following appointments, Dr. Coimbra asked if he could remember his time as an autistic: - NO, the boy says that there are no memories of that, it's as if his life began only when he started to speak.

Two years later he's going to school and wants to move out of his parents home. After two years on the Coimbra Protocol, the video we've seen was taken. Here, the boy argues that he now would like to move out of home to spend more time with other young people. He actually wants to move from Sao Paulo to Rio and go to school there, as his friends are all going to Rio to attend university.

For us - we Austrians did not understand Portuguese - the conversation was absolutely "normal" and typical. We never would have guessed that this boy is a former autistic!

Unfortunately, I did not take a picture of the video! The case report was unique to us!" 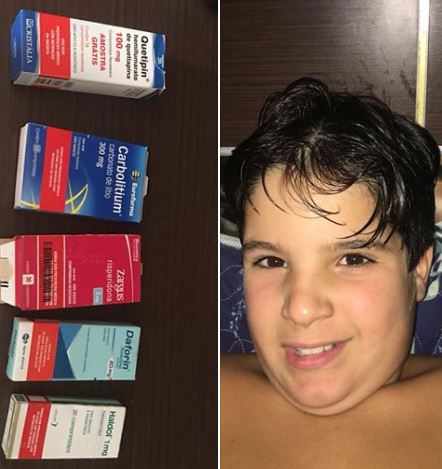 Testimony of Ana Lisboa, whose son, Victor, is following the Coimbra Protocol for Autism:

"Good morning, healthy people! I come here today to talk about my 12-year-old autistic son Victtor, and the resumption of his life after treatment with vitamin d.

Well, when Victor was 1 year and 3 months old we realized that he was different from other children, we then started a marathon with doctors in search of a diagnosis, but since I couldn't just sit and wait I started researching on the internet and discovered that he was autistic. We started the medical interventions, psychologist, speech therapist, special school. At five years of age, he had a crying crisis that lasted for two weeks. It almost drove me mad.

That's when the neurologists began to treat him with heavy drugs. The poor child spent most of the time sleeping and when he was awake he lacked the strength to play or to interact with others. At 12 years old, the crying crisis started again, nights after night, day after day.

That was when a friend of mine introduced me to vitamin D. I started researching and got very impressed with what I saw, so I scheduled an appointment with a protocol physician, Dr. Mario Ítalo, and began the treatment. We have been on the protocol for 7 months and the result is phenomenal. The crying that lasted for months ended within a month of treatment. Before, I had an irritated, crying, agressive child who used to bite and beat his brothers and classmates, today I have a happy, calm and obedient child. I recommend this treatment to everyone, because it will give quality of life for your children."
Top
Post Reply
4 posts • Page 1 of 1