I cut my foot when I took a tumble over my tricycle. So, of course, it's infected. I went to see my GP and she put a bandage over it with fucidin creme. She also prescribed cephalex. But first she drew a circle around the red part to see if it gets bigger or smaller.

So today, 2 days later, after removing the dressing, I asked Suzanne to draw another circle around it. She did. It was smaller than the perimeter the doctor had drawn.

The reason I am posting this:

1. She drew around the redness, which was very visible, and the line could be easily drawn.
2. Immediately after that, I spent 30 minutes on the circulation booster machine.
3. After 30 minutes the redness was markedly receded. During the booster treatment I was immobile for half an hour, while I sat in a chair with my feet on the machine.
4. Seeing how much it had receded I started another half-hour treatment, and that did not make the redness recede much more. But that's why you still see 29 minutes left on the display, in the picture.

The picture below shows
a) the first line the doctor drew, mostly gone now
b) the second line that Suzanne drew this morning
c) the obviously receded redness remaining after 1 half-hour treatment. I think this test will be easily repeatable. I don't know why the manufacturer doesn't advertise the thing this way.

You may also see tanning marks on my foot from the clip-sandals I wear on my tricycle. 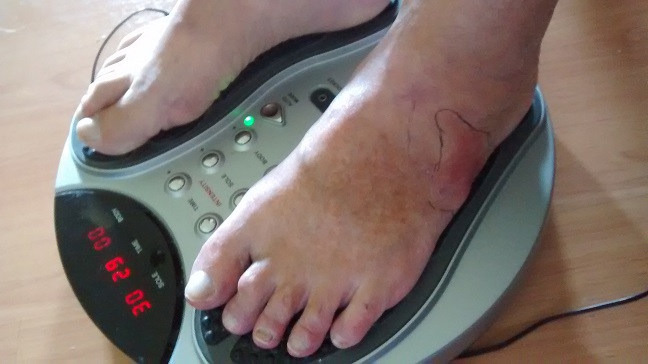 This unit of entertainment not brought to you by FREMULON.
Not a doctor.
Top
Post Reply
1 post • Page 1 of 1