A forum to discuss research on the origins of MS and its development.
Post Reply
3 posts • Page 1 of 1

Introduction:
In acute inflammatory optic neuritis (ON) as a typical onset of multiple sclerosis (MS), only few studies have investigated plasma exchange (PLEX) as a sequential treatment after insufficient response to high-dose intravenous glucocorticosteroids. Therefore, we aimed to investigate treatment outcome on visual acuity (VA) with PLEX in patients with steroid-refractory ON.

Methods:
In our retrospective monocentric study, medical records were screened for patients with acute ON as their first relapse with sequential MS diagnosis or with an established MS diagnosis from the Bern University Hospital (Switzerland) that were treated with PLEX between 2016 and 2018 due to lacking steroid response. VA prior to steroid administration, and before and after PLEX were assessed and compared using the Friedman multiple comparison test.

Conclusion:
Our study demonstrates significant improvements of VA with PLEX in a cohort of MS patients with steroid-refractory ON. High response rates may be due to the timely treatment initiation. Despite the small sample size, our data support the early use of PLEX in steroid-refractory ON with a favorable safety profile.
Top

Safety and efficacy of immunoadsorption versus plasma exchange in steroid-refractory relapse of multiple sclerosis and clinically isolated syndrome: A randomised, parallel-group, controlled trial

Plasma exchange (PE) constitutes the standard therapy for steroid-refractory relapse in multiple sclerosis and clinically isolated syndrome. Immunoadsorption (IA) is an alternative method of apheresis which selectively removes immunoglobulines (Ig) while preserving other plasma proteins. Although IA is regarded as a well-tolerated, low-risk procedure, high-level evidence for its efficacy is lacking. Therefore, we sought to investigate whether IA is superior to PE in patients with acute relapse of multiple sclerosis or clinically isolated syndrome who had insufficiently responded to high-dose intravenous methylprednisolone (MP).

Patients with acute relapse of multiple sclerosis or clinically isolated syndrome and without complete clinical remission of symptoms after at least one cycle of high-dose intravenous MP therapy were enrolled to our randomised, controlled, parallel-group, monocentric trial. Eligible patients were aged at least 12 years and had no clinical or laboratory signs of systemic infection. Eligible patients were randomly assigned (1:1) to receive either IA or PE. Patients in both groups received 5 treatments on 5 consecutive days. In the IA group, the 2.0-fold individual total plasma volume was processed on day 1, and the 2.5-fold on days 2–5. In the PE group, 2 liters of plasma (corresponding to the 0.69 ± 0.12-fold individual total plasma volume) were removed each day and substituted by 5% human albumin solution. Patients were followed up directly after last apheresis as well as 2 and 4 weeks after last treatment. The primary endpoint was change of the Multiple Sclerosis Functional Composite (MSFC) after 4 weeks compared to baseline. Analyses of primary outcome and safety measures were done in all patients who received at least one treatment (intention-to-treat-population). The trial is registered with ClinicalTrials.gov, number NCT02671682.

Both IA and PE were safe in patients with steroid-refractory relapse and resulted in significant improvements of the primary outcome MSFC after 4 weeks compared to baseline. IA patients showed significantly larger improvements of MSFC compared to PE patients after 4 weeks. The results indicate a potential superiority of IA compared to PE in treatment of steroid-refractory relapse in multiple sclerosis and clinically isolated syndrome, which has to be confirmed by future studies.
Top

Intravenous methyl prednisolone (IVMPS) represents the standard of care for multiple sclerosis (MS) relapses, but fail to improve symptoms in one quarter of patients. In this regard, apart from extending steroid treatment to a higher dose, therapeutic plasma exchange (TPE) has been recognized as a treatment option.

The aim of this retrospective, monocentric study was to investigate the efficacy of TPE versus escalated dosages of IVMPS in refractory MS relapses. An in-depth medical chart review was performed to identify patients from local databases. Relapse recovery was stratified as “good/full”, “average” and “worst/no” according to function score development. In total, 145 patients were analyzed. Good/average/worst recovery at discharge was observed in 60.9%/32.6%/6.5% of TPE versus 15.2%/14.1%/70.7% of IVMPS patients, respectively. A total of 53.5% of IVMPS patients received TPE as rescue treatment and 54.8% then responded satisfactorily. 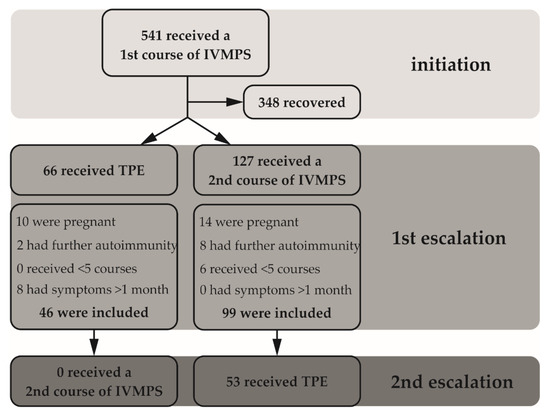