It is mediated by circulating autoantibodies directed against keratinocyte cell surfaces. A potentially life-threatening disease, it has a mortality rate of approximately 5-15%.

This Protocol requires the guidance and monitoring by a physician with specific training to analyze each particular case.

There is a List of Doctors Worldwide here: http://www.thisisms.com/forum/coimbra-h ... 27159.html.

Some doctors work via Skype

Malú is a young singer and stage actress, she was living a fully and happy life. However, suddenly, two years ago, she had her vocal cords, the oral cavity, the lips, nostrils, and including the joints, severely affected by an autoimmune disease extremely painful and stigmatizing called PEMPHIGUS VULGARIS.

Conventional treatment of Pemphigus is to administer high doses of cortisone, methotrexate an immunosuppressant, azathioprine, Cyclosporine, etc ... to minimize the production of autoantibodies.

However, like all mouths are colonized by billions of bacteria, the lesions of the mucous lining become "gateways" to the cardiovascular system. For this reason, the depression treatment of immunity for the treatment of Pemphigus Vulgaris, often causes severe life-threatening septicemias.

In this way, the optimal treatment for Pemphigus is vitamin D in high doses (Coimbra Protocol). This steroid hormone is the only substance known to date that has the uncanny peculiarity to suppress the Autoimmunity and, concomitantly, increase natural immunity that protects us from bacteria, fungi, protozoa, viruses and even tumor cells. For a long time, Malu suffered terribly. She went on to cover the lips with a surgical mask, stopped singing and distanced himself from the social conviviality.

She consulted numerous doctors and was already losing all hope. One day, luckily, she came across a post of Andréia, one of our patients that also has Pemphigus, disclosing that in a few days got rid of the disease with vitamin D Protocol.

Malu and Andréia became friends on Facebook, talked a lot and she decided to schedule an appointment. The result of the treatment was simply spectacular. Malu was good in 15 days and, in a gesture of extreme altruism, she was keen to share his sufferings, with the exclusive goal of helping thousands of people around the world who are suffering as much as she suffered. In 2010 (7 years ago) Andréia had several relapses and developed a severe and unusual pathology called Pemphigus Vulgaris.

She tried several treatments with azathioprine and high doses of cortisone. The injuries have decreased with this treatment, however, she gained 35 pounds and whenever she tried to reduce the dose of medicines the lesions reappeared.

A year ago she came to us to start the vitamin D Protocol (Coimbra Protocol). I told her she was my first patient with Pemphigus Vulgaris, but I believed that she would be good in no time.

And that's what happened. Quickly she got rid of injuries and began to lose weight.

Andréia has a very dynamic personality and selfless. As soon as she received the benefits of treatment with vitamin D, she started to help other people.

During the 12 months of treatment with the Protocol, Andréia realized clearly the importance of the gluten-free diet for the full therapeutic success. Every time she did small transgressions, new lesions appeared.

Patient Masc, 71 a, had conventional treatment 2 years ago, virtually no improvement.

With Only 30 days taking high doses of vitamin D, it obtained significant reversal of the clinical picture.

Photos on the left: before; on the right: after. Detail: no cream, lotion or ointment has been prescribed. ​ 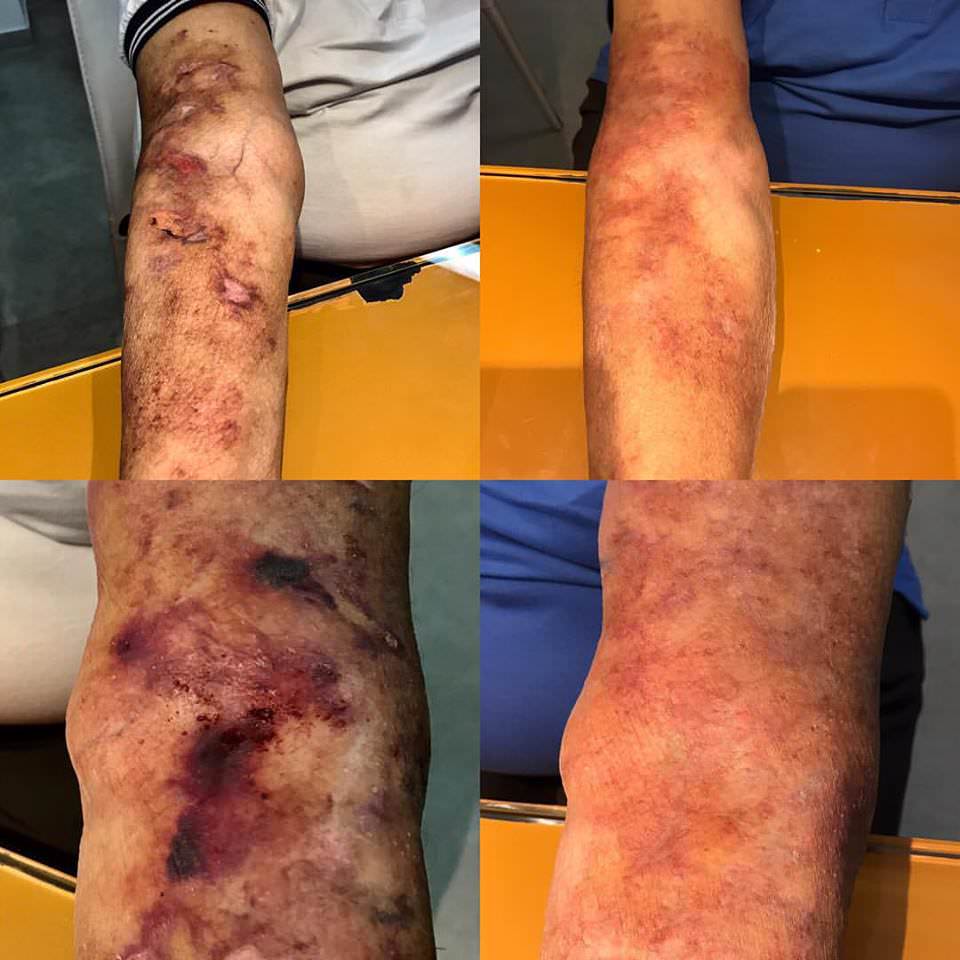